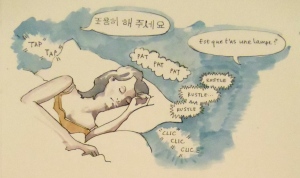 ASMR: a sensory experience so personal, private and internal that it hadn’t been documented as an experience or sensation in any language that I know of. I’m not even sure I’d ever heard it described in literature or song – even obliquely, but in 2009 when I searched “relaxing voice” I became a passive member of a community which had described a sensation and it’s triggers through the medium of short film.

It remains a private experience, on mobiles and computers, usually in bedrooms, late at night. I really thought that it was something that everyone experiences – and to some extent wonder if it could be a more widespread phenomenon, with some people having lower thresholds for triggering it than others. But, in particular among those who haven’t experienced this profound relaxation, there is scepticism. For them, ASMR viewers are enjoying (or are even titillated by) the particular attentions of beautiful women.

And I can understand their scepticism, similar to that voiced for now well investigated sensory phenomena such as synesthesia, or more concretely the sensations associated with the syndrome of “low pressure headache”, described, but controversial, l before the era of MRI revealed “physical evidence” for this.

There is nowhere less sexy than an albergue. It’s a low cost dormitory offered to walkers following the Camino de Santiago*. After walking some 20-40 kilometres (on average) peregrinos pay a minimal sum for a mattress (on the floor or a bunk bed) and retire early (usually) ready for walking early the next morning, before the midday sun.

This summer I walked just shy of 900 kilometres, on the coastal “Camino del Norte”, spending most of my nights in this kind of accommodation.

I have simply never experienced more intensive ASMR, in this most unlikely of places.

The lights in the albergue go out at around 10 or 10.30pm, but for a peak ASMR experience, I’d recommend slipping into your sleeping sack (or sheets) at around 9.30pm.

There’s a bit of visual stuff. People are carefully folding clothes and items for the next day. They move slowly and softly (the walkers are usually very respectful of those who have already gone to sleep), they smooth out their sheets.

But the audio is where the albergue really comes into it’s own. The volume until 9pm can be rowdy or chatty, with little respect for any very early sleepers, but almost like a gradual dimming of the lights in preparation for a performance, the volume drops.

This drop from normal speech amplitudes gives way to a staccato silence punctuated initially by the clicking whispers of the various nationalities on the camino. There might be a crescendo type performance from a chorus of Polish walkers with incomplete plans for the next days’ walking. One of them may break into normal speech by accident. The very fragile nature of unintentional (or as I like to call it “found” ASMR) is part of it’s beauty, and generally a hiss to suggest a return to whispering follows.

These ensembles give way to “soloists”: the late bag packer: carefully clicking, opening, closing bag buckles, the rustler: trying to minimise their plastic bag noise, the walker: low frequency muffled footsteps across a wooden or linoleum floor and the reader: still flicking though the pages of their guide, consulting the next day’s route. There can be special performances: in one albergue a girl methodically detangled her curly hair with a brush, making for a glorious background sound.

In the same way that the enjoyment of the music of an orchestra or band does not rely on the physical attractiveness of that group of people, the source of these soft sounds and movements is very much secondary to their nature.

As others search to experience exhilaration or terror on a roller coaster or go to see a comedian to laugh and be entertained, I seek out the ASMR artists and their well timed soft, tapping and clicking noises for the sensation they create. Something which seems to mainline my central nervous system, producing a profound relaxation, and a sensation which I’d hesitate to call tingling  (but I can see why others would use that word) in my back and neck.

Silence, or worse, snoring drown out the orchestra at usually 10.30-11pm. Despite “hanging on” for the tingling, I was generally asleep by that point anyway.